The Wilko store at the northern end of the Chelmsley Wood shopping centre has one of the largest flat roof areas in this 1970’s built retail complex, which also houses many national retailers as well as local government facilities. Following an appraisal of the flat roof covering by Black Cat Consultancy, it was found that the old bitumen felt waterproofing had been overlaid with a covering of thermoplastic single-ply membrane which had split in many places allowing water ingress into parts of the roof substrate. A moisture mapping exercise by Bauder, using their Troxler moisture detection system identified the areas where water had ingressed into the substrate and which would require full reinstatement. The majority of the roof area was found to be suitable for an overlay with a new bituminous system. Following a tender process, BBR Roofing were appointed to carry out the re-roofing works, according to a Bauderflex system specification.

Working to the moisture map provided by Bauder, and supervised by the Bauder site technicians, BBR stripped out the defective areas and reinstated them to a similar level with new insulation. The whole roof area was then overlaid with the Bauderflex system, on a 25mm insulation board to provide isolation between the existing thermoplastic membrane and the new bituminous materials. The Bauderflex system incorporated a mix of torch-applied and torch-free materials, according to the nature of the substrate. Areas requiring torch-free materials were identified both prior to, and during, installation works by BBR Roofing’s risk-assessments and their ‘Safe-to-Torch’ policy. Among the many challenges on this project, BBR maintained a close liaison with the retail occupants below during roof stripping works to ensure no disruption to their business activities, particularly during a prolonged spell of bad weather. The works, completed to the satisfaction of the client, were described by the Bauder site technician as one of the best installations he has seen. 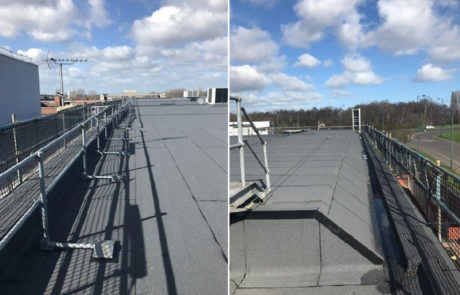 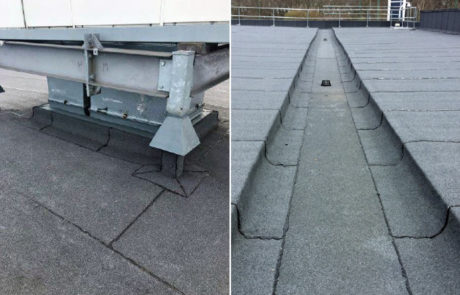 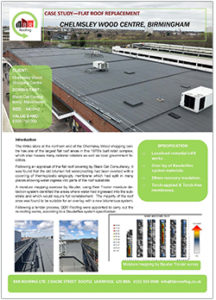