BBR Rooﬁng had carried out several projects of re-rooﬁng and remedial works on this expansive shopping centre in Liverpool, so when it was found that major structural repairs to the roof deck were necessary, and that these alterations would need to be waterproofed, we were happy to be a part of the team helping to preserve the centre’s structural integrity.

The concrete ‘waffle’ roof slab over one area of the shopping centre had developed structural weaknesses at its junction to a main wall separating it from an adja-cent part of the complex.

Structural engineers devised a system of beams which would support the failing deck by suspending it on hangers from the cantilevered ends of the beams, the opposite ends of the beams being anchored to the adjacent roof deck.

The beam ends were anchored to the adjacent roof slab and the connections boxed in with plywood. The boxes waterproofed with 2 layer Bauderflex bituminous membrane. The junction between the beam and the boxing was sealed with Bauder Liquitec liquid-applied waterproofing, with mineral grit added for aesthetic effect.

Inside the plywood boxed duct to the left, the beams over-sail a wall top and have suspension bars at their ends which carry the adjacent roof deck.

The beam ends, where they penetrate the plywood boxing, were waterproofed with a combination of Baudeflex bituminous membrane and Bauder Liquitec waterproofing. Loose mineral grit, matching the mem-brane surfacing, was applied to the liquid while still wet. 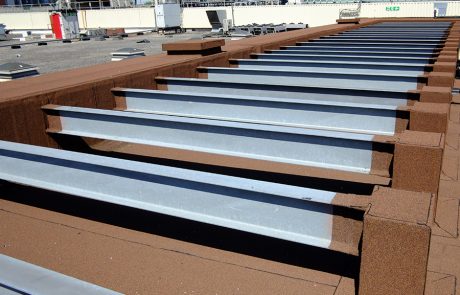 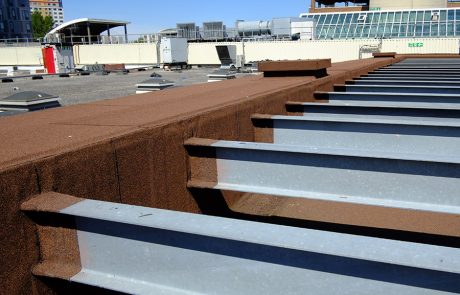 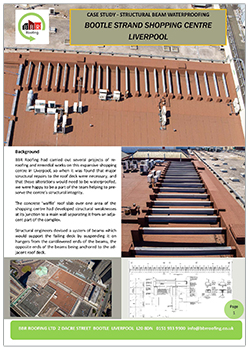