The Lyceum Building in Liverpool is a Neoclassical Grade II listed building, constructed in 1802 as a news-room and England’s first subscription library (1758-1942), and later became a gentleman’s club. After the club relocated in 1952 the building was left un-occupied for many years, eventually falling into a state of disrepair. Despite calls for its demolition in the late 1970s, the building has survived and is now under new owner-ship.

When the new owners of the property embarked on refurbishment throughout, a roof inspection by Liverpool consultants E3 Cube found that a roof refurbishment was re-quired to protect the valuable interior of the building.

BBR Roofing were subsequently appointed to carry out the roofing refurbishments according to a schedule of works produced by E3 Cube, and incorporating a specifica-tion for the re-roofing of the flat areas using Bauder bituminous materials. Other works which were required included remedial works to slated pitched roofs, restora-tion of a glass lantern light, extensive lead replacement to roof perimeters and exter-nal stonework, and external re-painting of windows.

BBR Roofing, as Principal Contractor, set up a site compound in front of the building, in the busy Central Station area of the city, together with full hoardings around the building perimeter. An existing restaurant business operating at ground level within the building required permanent and safe access for its customers, and close liaison with the BBR site supervisor.

The existing stone -chipped roof covering had almost become a ‘green roof’ due to the amount of moss growth within the stone chippings. The new mineral-surfaced roof covering will not suffer from the develop-ment of moss.

The original glass lantern light over the decora-tive and historical internal dome over the main internal space of the building was stripped apart and new timbers inserted where neces-sary. New lead-work was added at the base and to form a new cap, and replacement Geor-gian-wired glass and seals completed the reno-vation.

On the external stones faces and parapet gutters, new lead was inserted and welded to replace the aged existing lead.

New opening roof-windows were inserted on the pitched roof faces and remedial works car-ried out to the slate covering, including new lead flashings. 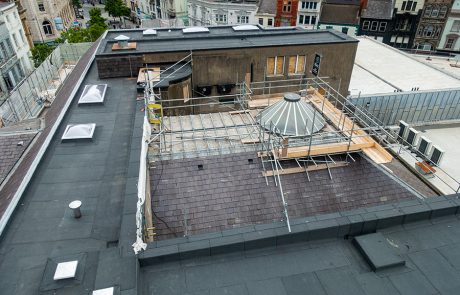 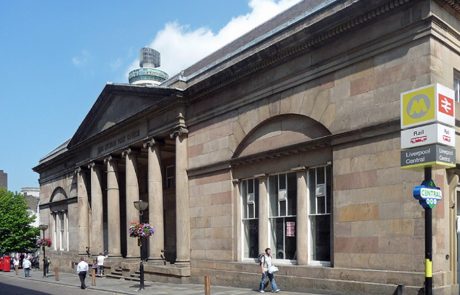 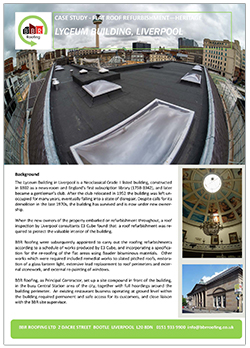