Despite the fact that for many years, flat roofing codes of practice have recommended that roofs should have minimum falls for drainage, many older roofs have little or no falls.  It is also the case that many flat roof refurbishments only provide renewal of either the waterproofing or waterproofing and insulation.  This can lead to some clients being surprised and disappointed that their new roof covering still holds ponds of water, so it important therefore that client’s expectations are properly managed before work commences.

A re-roofing proposal, quotation or specification should itemise exactly what works are to be carried out on the roof, and also the impact of any works which are not to be carried out, such as rectification of surface falls.  If a flat roof holds ponds of water in its current condition, it will almost certainly hold water after refurbishment if no corrective action is to be taken.  In the case of renewal of roof coverings which are currently covered with a layer of stone chippings, as was common practice in times past, water ponding on the new smoother surface roof covering (mineral surface bituminous or single-ply membranes for example) will appear worse than previously, since the ponding water was less apparent within the stone covering.

So what can be done to remove ponding water from refurbished flat roofs?

In the days of pour-and-roll bitumen felting, there was some lee-way to shift ponds of water by flooding hollows with excess liquid (hot) bitumen.  This helped slightly in localised areas, but generally only shifted the water to other parts of the roof.

Today, the principal methods of correcting drainage falls within refurbishment schemes are 1) re-decking to falls, or 2) installing a cut-to-falls, or tapered, insulation scheme.
There is no definitive answer to which approach is best, the optimum solution will depend on a number of factors pertinent to a particular roof, such as;
• Size and complexity of the roof layout
• Whether the existing roof deck is to be replaced as part of the scheme
• The number and locations of drainage outlets or perimeter gutters.

Where a roof deck is to be replaced due to its defective condition or fragility, such as straw-board, wood-wool, chipboard or wet timber boards, it may well be more economical (than tapered insulation) to replace the deck on firring pieces to falls, particularly if the roof is not large or of complex plan.  However, long runs to drainage points, or changes in falls direction necessitating mitred timber hips and valleys will incur additional costs and onerous timescales for the contract programme. Cut-to-falls insulation schemes can be readily designed to accommodate changes in direction as well as the more complex roof layouts.

At this point it is worth noting that whereas falls of 1:80 have long been the recommended drainage falls for a flat roof, the recent update of BS6229 (‘Flat Roofs with continuously supported flexible waterproof coverings’), issued in November 2018, recommends design falls of 1:40, which is intended to counter-act the effects of construction tolerances or natural deflections reducing surface falls in localised areas of the roof.  Any roof deck which spans between two supports will have a tendency to sag under its own weight, which reduces the falls over part of the roof.

In real terms, a 1:40 fall equates to 25mm per metre run of roof.  Hence a ten metre run requires 250mm of fall from high to low point.  As the timber firrings in a re-deck scheme, or the insulation material in an insulation scheme will have a minimum thickness to be added to the amount of fall, the total depth of the roof build-up at the high point can have a significant impact on the roof’s perimeters and abutments.  Existing kerbs and damp-courses in brick wall abutments are often not high enough to accommodate the increased height of the roof covering necessitating ancillary works to the building edges and junctions, the costs of which have to be factored in to the overall cost of the re-roofing scheme.

The client may not always have the budget to carry out a complete reconfiguration of the roof’s surface falls, or there may be restrictions in terms of what can be practically achieved due to the existing building construction, but where no enhancement of falls is proposed in a re-roofing scheme the client should be advised of this fact and the implications for the refurbished roof covering. If the roof suffered from ponding water previously, it will continue to do so after re-roofing, and if the re-roofing scheme is part of a manufacturer specification, this may have implications for the manufacturer guarantee. 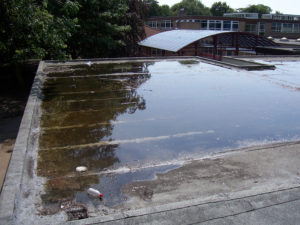 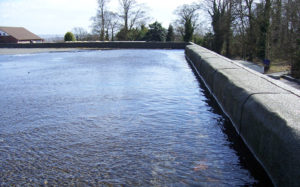 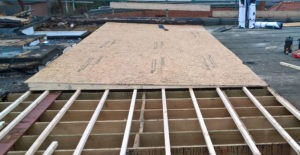